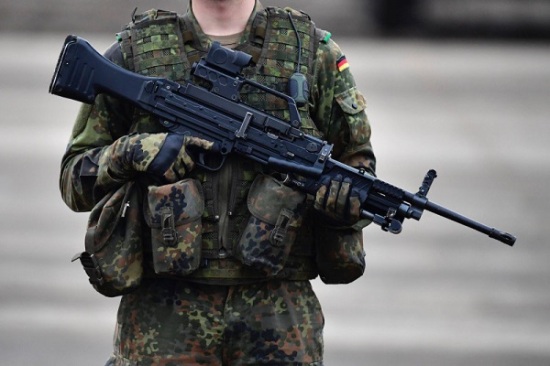 The Germans want a free ride and they’re offended at having finally been caught.

The Sorry State of Germany’s Armed Forces – Trump’s calls to withdraw U.S. troops from the country are impulsive, but Germany isn’t blameless.

The German armed forces are in a sorry state, and that’s not because Germany, more important to NATO’s efficacy as a collective defense pact than any other European member state, lacks the means to fix this problem. It does not.

Germany’s gross domestic product, valued at $4 trillion, ranks fourth in the world and first in Europe. The country is also Europe’s technological powerhouse. Indeed, in 2018, the World Economic Forum hailed it as the world’s leader in technological innovation.

And yet the German military remains riddled with problems. A damning 2019 report (available in an English-language summary) issued by the Bundestag’s then commissioner for the armed forces, Hans-Peter Bartels, summed up the problem.

PS: Please note here that the woman who ran the Bundeswehr for years and years and proved to be unable to fix it is now the woman EU technocrats (voters weren’t asked) have chosen to fix Europe. 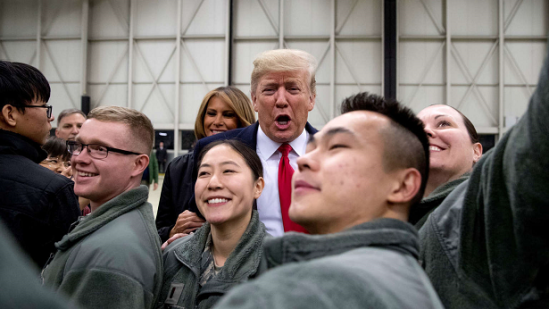 You know, as in Donald Trump accusing Germany of being “delinquent” in its payments to Nato, and saying he would stick with the plan unless Berlin changed its course? The truth hurts, Germany. “Why does Germany pay billions to Russia for energy and then we’re supposed to protect Germany from Russia? How is that supposed to work? It doesn’t.”

Trump confirms plan to cut troops in Germany – US President Donald Trump has confirmed plans to withdraw 9,500 American troops from bases in Germany.

No, not that kind of an ocelot. The German Ozelot mobile air defense missile system kind of ocelot. 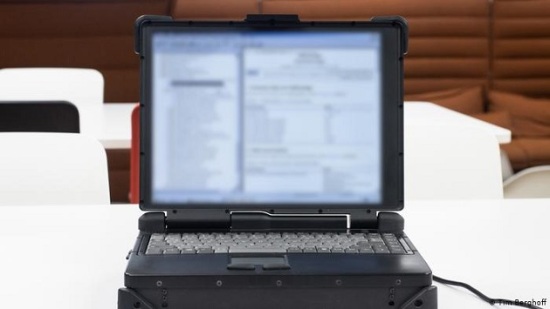 Why would you want to? Just buy an old Bundeswehr laptop on eBay for $100 that includes classified Ozelot instructions and proceed to destroy the damned thing.

30 of the 120 German soldiers stationed there are to be immediately flown to safety. 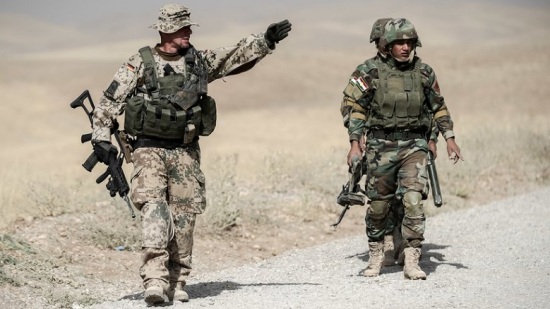 However, it was unclear at this time just who will be flying them out as the German military doesn’t have any aircraft that actually fly.

Germany is moving some of its military personnel from Iraq to neighboring countries over security concerns, the government told lawmakers, days after the killing of a top Iranian military commander in a U.S. drone strike. 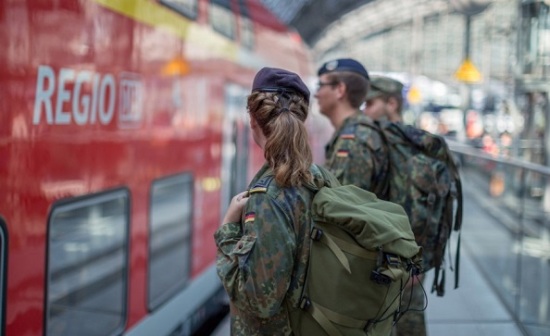 None of the Bundeswehr’s transportation systems work so this way they’ll still be able to make it to combat operations on time. Although, on the other hand, Germany’s railway isn’t the most reliable these days either.

German service members in uniform and their children will be allowed to travel for free on trains in Germany, beginning next month. Germany’s minister of defense and the head of Deutsche Bahn came to an agreement Monday in Berlin, allowing military members from each branch to ride all of the national railroad service’s trains at no cost, together with their children up to the age of 14. Spouses will still have to pay their own way, a German Defense Ministry spokeswoman said Tuesday.

Like a hole in the head. No, really. It makes sense, sort of. And by 2031 they won’t need it anymore anyway. 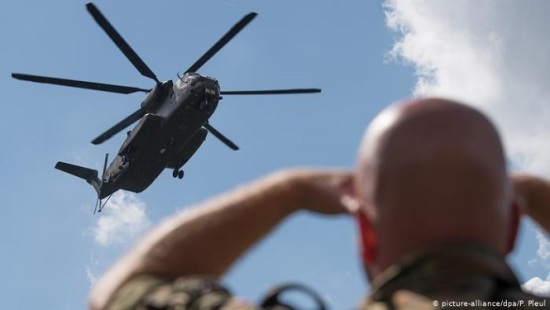 The German defense minister, Annegret Kramp-Karrenbauer AKA AKK, AKA Mini-Merkel, who also serves as head of the Christian Democratic Union (CDU), says she plans to move forward with the formation of a national security council in recognition of Germany’s strategic interests.

In an earlier interview with the Süddeutsche Zeitung, she urged Berlin to take an increasingly active role in military engagements abroad.

Germany must “openly deal with the fact that we, like every other country in the world, have our own strategic interests,” Kramp-Karrenbauer told the Süddeutsche Zeitung.

Germany commits to NATO spending goal by 2031 for first time.

That’s what it means when it comes to troops and international security zones, at any rate. 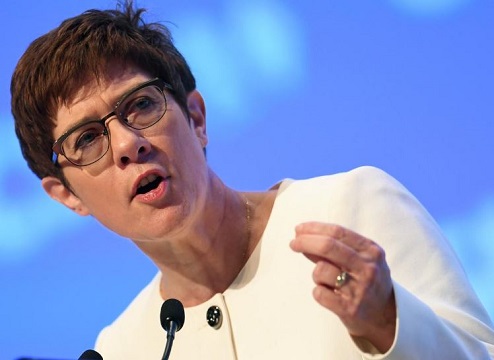 It’s hilarious to watch this ritual. Whenever no one else is around to do the dirty work (in this case US-Amerika in Syria), Germans like to pretend that an international force can do the dirty work instead. The punchline comes later, however (stay tuned): The same Germans will then turn down any attempt made in the Bundestag to have German troops participate in such an international security zone. It’s a win-win situation.

Germany’s defence minister has suggested creating a security zone in northern Syria to protect displaced civilians and ensure the fight continues against Islamic State militia, the first time Berlin has proposed a military mission in the Middle East.

Annegret Kramp-Karrenbauer, Angela Merkel’s preferred successor as chancellor, said she would discuss the initiative with NATO partners this week and did not rule out sending German soldiers to Syria, saying that would be a matter for parliament.

“We cannot just stand by and watch and not doing anything.” That’s right. Sit down and do so.

Don’t anyone ever tell you that Germans aren’t reliable. 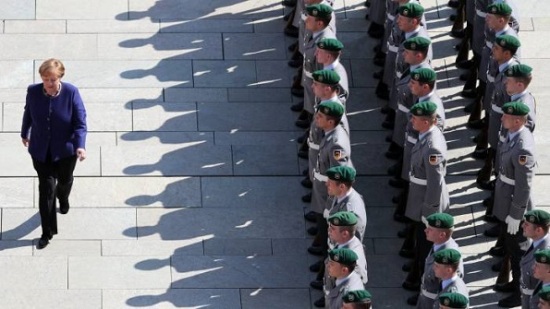 As noted yesterday, the equipment used by the German army is still as inadequate as ever, despite repeated promises by the German defense minister to make improvements.

And now, despite claims by the German government to one day reach the official NATO target of 2 per cent GDP on defense spending it agreed to years ago, it won’t even be able to make the 1.5 percent it set for itself by 2024. This is “round,” as the Germans say. It all fits like a glove.

Germany is on course to miss its self-declared target for defence spending in a development that threatens to trigger a new row with the US and raises further questions over Berlin’s military contribution to Nato.

The government of Angela Merkel agreed last year to raise the German military budget to 1.5 per cent of gross domestic product by 2024 — a marked increase but still short of the official Nato target of 2 per cent.

But the 1.5 per cent target is now under threat after Olaf Scholz, the Social Democrat (SPD) finance minister, rebuffed plans for an ambitious increase in military spending in the years ahead, citing a worsening economic outlook.

As of Jan. 1, Germany is on the hook to provide 5,000 soldiers for NATO’s so-called Very High Readiness Joint Task Force, or VJTF. The formation must be ready to fight wherever it is needed within 48 to 72 hours. Partner nations for this year’s rotation include the Netherlands, Norway, France, Belgium, the Czech Republic, Latvia and Lithuania, bringing the total package to around 8,000.

A key rationale for the quick-reaction force is to display to Moscow the ability to ferry combat power across Europe rapidly at a time when speed is believed to be a Russian advantage. Governments here are on edge from the 2014 Russian invasion of Ukraine’s Crimea, and more recently from a naval standoff between the two countries in the Sea of Asov. Both incidents fit into a pattern of Russia steering clear of outright war while trying to shake up the post-Soviet order around its borders, according to issue experts…

The Bundeswehr, plagued by equipment shortfalls, management problems, or both – depending on who is asked, has had to dig deep to assemble the needed equipment for the task force lead. In the end, funneling supplies from across the force to the tip of the spear appears to have worked, but it has depleted the readiness of many units, said Christian Mölling, an analyst with the Berlin-based German Council on Foreign Relations, DGAP.

“It means the rest of the Bundeswehr is no longer the kind of deterrent it is meant to be.”

Because it can’t find enough Germans willing to serve. 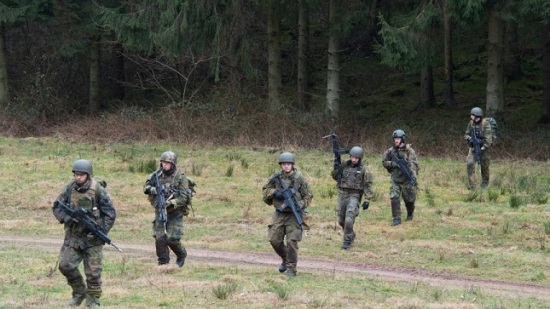 Germany’s armed forces appeared ready to break with its German nationality prerequisite for fixed-term and professional soldiers Thursday by suggesting that other EU citizens could help fill its thinned ranks.