For Germans, Losing the U.S. to Trump Is Like Losing a Father – The 30th-anniversary celebration of the Berlin Wall’s collapse comes with grief over the end of a special relationship.

I don’t know if I can hold back the tears but give me a second or two. There. I’m much better now. Thanks. But this massive output of cheap emotion has a heavy taste of déjà-vu in it for me, folks. The Germans already had their hearts broken and lost their special relationship back with W., didn’t they? And we don’t even want to talk about how heartbroken they were with Ronald Reagan HIMSELF. They don’t even want to have to think about him today. Some thirty years later. You know, thirty years after he made possible the fall of the Berlin Wall? Wait a minute. I’m chocking up again…

Berlin gets unwanted Ronald Reagan statue – Ronald Reagan is already an honorary citizen of Berlin, so city authorities have always deemed a statue inappropriate. Nonetheless, a bronze replica of the former president is set to be inaugurated at the US Embassy. 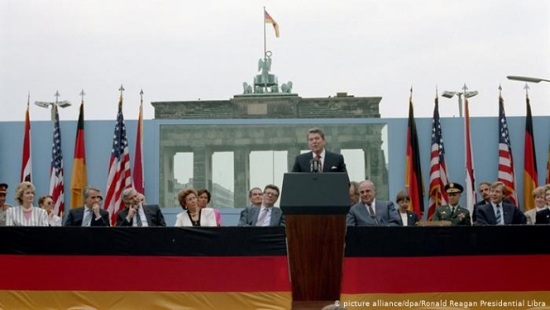 No, not Dean Reed, James Dean.

Although Red Elvis would probably have more supporters here in Berlin’s Senat today if it came to such a bout–and might yet get a street named after him here one day too, which is more than you can say for Ronald Reagan.

What the hell am I trying to get at here, you ask? I don’t know anymore. I seem to have forgotten. Oh, yes. Now I remember.

Germany’s defense minister Karl-Theodor zu Guttenberg has just called to name a street or a square in Berlin after Ronald Reagan on the 100th anniversary of his birth coming up on February 6.

No big deal, right? Only you must keep in mind that this is red-red Berlin (SPD and the Left Party) and that we are still in the here and now and folks like these don’t even want to commemorate Mr. Tear-down-this-wall-Mr.-Gorbachev’s birthday, much less name a street after him. They only name streets after romantic revolutionary figures like Rudi Dutschke.

Or as zu Guttenberg put it so well: “It would be a welcome event to name a street after this great honorary citizen and provide evidence that red-red gratitude doesn’t have to end with Rudi Dutschke.”

FDP Berlin representative Martin Lindner hastened to add “You are being blind to history and presumptuous not to properly acknowledge this great and steadfast friend of Germany.” Lindner had proposed renaming Berlin’s Central Station’s Washington-Platz in Reagan’s honor back in 2004.

Quite provocative from Guttenberg & Co., I find. They know perfectly well that there’s no way in hell Wowereit and his Linke friends (link can also mean deceitful in German, by the way) would ever allow themselves to stoop to honoring such an über-Feindbild (longstanding mega-enemy stereotype) like that.

Responsibility is the price of freedom.