The polling predictions made before the Bavarian election yesterday, I mean.

Whether the actual results are bad or not depends entirely upon your point of view.

The CSU’s drop was not quite as bad as predicted (although they will no longer be able to govern without a coalition partner), the SPD’s drop was breathtaking (the worst regional election result in their history) and the AfD did not get the votes that many had feared they would. This was probably due to the success of the regional “Free Voters” party (CSU-light) that will now most likely be the CSU’s coalition partner. The free market-friendly FDP just got in by the skin of their teeth with 5.1 percent of the vote (5 percent minimum needed). The Left didn’t make it in, as usual. The Greens made a huge leap forward but who cares? This is Bavaria and they don’t go for this utopian stuff so they’ll make a fine opposition party which is where they belong.

So it looks like Angie Merkel will live to resign another day, as usual.

We know how accurate they can be for American elections, right? Let’s see what the results will be like after the Bavarian election today.

Some say if Merkel’s CSU partner party loses as bad as these polling number suggest it could be the straw that finally breaks her camel’s back. I doubt it will happen, though. As the Germans say: Totgesagte Leben Länger. This chick ain’t never going away.

The Christian Social Union (CSU) has ruled Germany’s richest state since 1957, sharing power just once in a coalition with the free-market FDP. And since then, every Bavarian prime minister has risen from its ranks.

But now, swift as a reveller draining his tankard, support has ebbed away.

The CSU is bracing itself for humiliating losses in Sunday’s Bavarian state election. The party is on course to lose the absolute majority its leaders once took for granted.

It is the only political party in Germany that declares “Jew-hatred” as “inseparable” from Islam, and says out-loud that Islamic religious dogma is “incompatible with the German constitution”.

That is Dimitri Schulz’s view of the far-right Alternative for Germany (AfD). A Jew who was born in the Soviet Union and came to Germany with his parents as a small child, Mr Schulz is one of a small band of Jewish AfD supporters who see the party as a bulwark against the Islamic threat to Europe.

Thanks again, Angie. They couldn’t have done it without you. 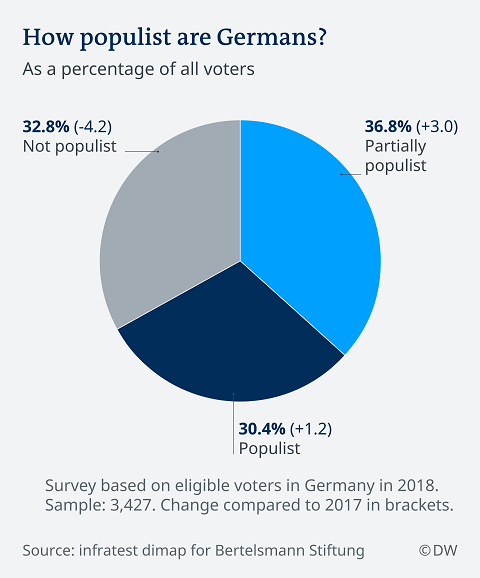 Populist attitudes are on the rise in Germany, particularly from within the political center. One in three voters now sympathizes with populist policies, according to a new study by the Bertelsmann Foundation.

The latest “Populism Barometer” found that almost every third German voter sympathizes to some degree with populist anti-establishment policies, whether on the left- or right-wing of the political spectrum.

At the same time, the number of sampled voters who identify as politically centrist has decreased by four percentage points, to just 32.8 percent.

The latest poll indicates that the AfD has now surpassed the SPD in popularity and is now number two among the political parties in Germany. None of the other parties will work with them, of course. Not yet, anyway. Of course, none of the other parties will ever need to work with them if they get an absolute majority of the vote in the next election.

As for the causes of this continued surge in popularity, none of the smart folks in government, academia or media can figure out why this is happening. I think it’s time to call even more experts, don’t you?

That means to whitewash.

And as Angela Merkel herself says, there is nothing to whitewash about her party’s decision to refuse reelecting her man Volker Kauder as CDU party whip. They elected the Merkel critical Ralph Brinkhaus instead.

The natives are getting restless. The AfD keeps growing in popularity. Her coalition partner SPD is still dead and getting deader by the minute. Now her own party members are trying their hand at open rebellion. Other than that, though, everyhing is looking just fine.

The AfD’s popularity. But it keeps on growing. How can that be? 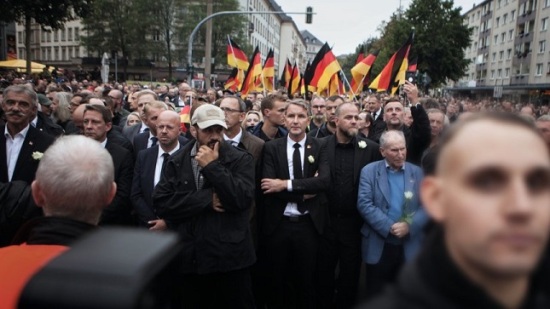 Anyone “good German” you ask will explain to you that the AfD is “bad” and “racist” and “Nazi” and “completely unacceptable.” The friendly people from the German media will explain that to you, too. How could such an awful group of people keep on growing in popularity? Something must be wrong somewhere. What on earth could it be?

The AFD is benefiting from being the official opposition to Chancellor Merkel’s grand coalition government. Polls rate it Germany’s second most popular party, dropping the Social Democrats to third.

Actually, it’s in Bavaria. But still.

And it’s not really an alien crop circle, either. It’s more like an alien cross. It’s a strange geometrical figure and ancient religious icon most likely stemming from the cultures of Eurasia where it remains a symbol of divinity and spirituality in Indian and East Asian religions, to be exact.

So I guess this crop circle didn’t come from outer space after all. It’s also made of manure. That, too, is pretty weird and strange. And the letters “AfD” are also clearly visible next to it. Nope, no alien would write those letters. Not even an illegal alien from outer space would do that, I suppose. This was the work of human beings. Human being artist types who use manure for their shitty works of art. This, too, is weird and strange. And eerie.

After her decision to let more than a million refugees into Germany.

She hasn’t got around to condemning murder yet but she’s lernfähig (capable of learning), or at least she claims to be.

German Chancellor Angela Merkel condemned xenophobic attacks and the use of Nazi slogans in a robust speech to parliament on Wednesday after the most violent far-right demonstrations in decades exposed deep divisions in the country.

Protests of right-wing radicals in the eastern city of Chemnitz two weeks ago after the fatal stabbing of a German blamed on two migrants has reignited a fierce debate about her 2015 decision to let more than a million refugees into Germany.

The latest Emnid “Sunday trend” survey indicates that Germany’s CDU/CSU Union and SPD “grand” coalition government continues to loss favor with German voters – and is not nearly as grand as the name implies.

Like the SPD experience last week when it fell behind the AfD in similar popularity ratings, the CDU/CSU has also continued its slide and are now only at 29 percent. With the SPD’s current 17 percent rating, the grand coalition would only reach 46 percent of the vote if elections were to be held today.

Everyone is puzzled about what the reason for these low ratings could be. Not.

You get no moral credit for forcing other people to do what you think is right.