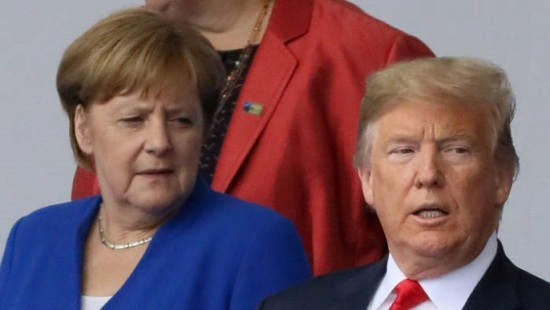 North Korea, China, Iran, Cuba, Venezuela: America currently has disputes with a lot of countries. Europeans, meanwhile, have done quite well at keeping their heads down. A US-EU trade truce is still holding. And Nato’s 70th anniversary festivities in Washington came and went in early April without tweet fireworks from the president threatening US withdrawal.

There was one notable exception to this queasy peace, however: Germany.

At a think-tank event during the Nato celebrations, vice-president Mike Pence castigated Germany for its inadequate defence spending and for being a “captive of Russia”. A few weeks later, presidential daughter-in-law Lara Trump opined on Fox Business that Angela Merkel’s welcome of refugees in 2015 had been Germany’s “downfall” and “one of the worst things to ever happen” to the country.

Germany is, in fact, having a bit of a moment in the roiling imagination of the Trumpian nationalist right. It has been denounced as “selfish” and “America’s worst ally” by Ted Bromund, a scholar at the Heritage Foundation. Jakub Grygiel, until last year a member of the State Department’s policy planning staff, called it “a source of fear and resentment”. And Michael Anton, a former senior White House adviser for strategic communications, just published an essay on the “Trump Doctrine” which contends that the EU is “a fraud” and Germany “treats the EU as a front organisation”…

Like I said. All of this is outrageous. And, well, I dunno, like, how should I put it? True. It’s actually much worse than all of that but nobody wants to hear it so, shame on you, President Trump!

As if the shocking sexual coercion German women force their male sex slaves to endure again and again and again wasn’t bad enough already (and it certainly must be), an even more shocking new study has revealed what many of us have suspected all along: German women also regularly subject their German men to vicious physical abuse of the most cruel and unusual kind.

One Betroffene (person concerned) reports: Hamburg. At first he thought that he would be able to overcome the problems with his girlfriend. This is what Jochen K. (the initial has been changed to protect the innocent) wrote in his diary after she hit him the first time in the face with her fist. He held her back and tried to calm her down. But the attack in the hallway was not to be the last one. His girlfriend turned violent again and again in the following years. She couldn’t come to grips with her problem. Today Jochen K. admits that he must have been crazy to think that he could have overcome this problem alone.

But just what is it that makes these crazy German bitches so violent? Many psychologists and law enforcement experts believe that these men-beating monsters are simply products of their environment and actually victims themselves, having been socialized in a system of matriarchy in which beatings of this nature are simply not taken seriously. These women beat their men because they can, in other words.

So what can YOU do about it, German men? Break the silence. That’s the first step. And then go out and seek help immediately. Preferably in a city far, far away where nobody could possibly know you. And please, whatever you do, never ever use your real name while getting help, not unless you absolutely positively have to. No, I take that back. Don’t even use it then.