It’s May Day in Berlin! And Berliners are big on tradition.

Tuesday I watched the riot . . .
Seen the cops out on the street
Watched ’em throwin’ rocks and stuff
And chokin’ in the heat
Listened to reports
About the whisky passin’ ’round
Seen the smoke and fire
And the market burnin’ down
Watched while everybody
On his street would take a turn
To stomp and smash and bash and crash
And slash and bust and burn

Big capitalists like this store owner have to pay. 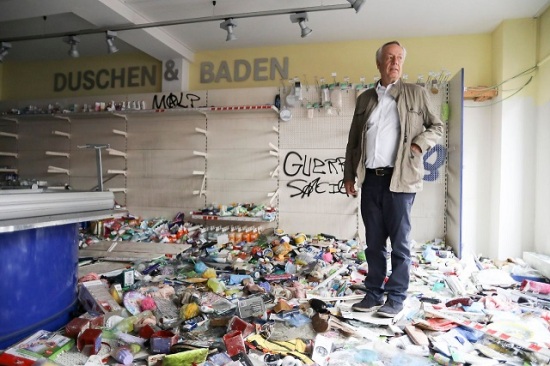 “This proves that capitalism doesn’t work,” one masked activist with a Z sprayed on his chest explained. “Any system that would let people like us destroy this guy’s capital with impunity simply ain’t got no future.”

I’m finally starting to see the light, people. This is what a world without globalization would look like. The annoymous theft and destruction would only take place locally.

A farce, this “protest movement” at the East Side Gallery. And a well-written article, this is. But sorry, I don’t have the time or the energy to translate it today.

Who says that in-fighting and a complete absence of credibility, character, policy, tactics or strategy can’t get you anywhere? It got Germany’s Pirate Party to nowhere fast. So you better take one quick look at them while you still can. 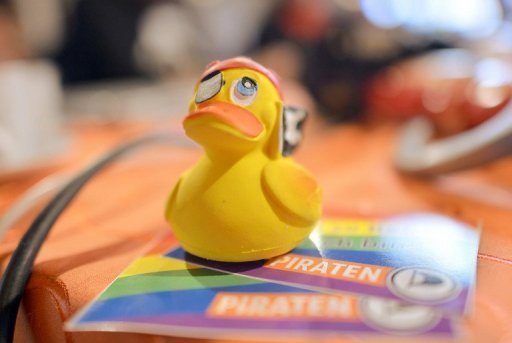 They’re down to five percent in the polls at the moment, and sinking fast. But let’s move on now and just try to remember them for all the good things they accomplished while they were still here among the living (hell if I know, I thought you might have).

Who cares? The KFC got torched. 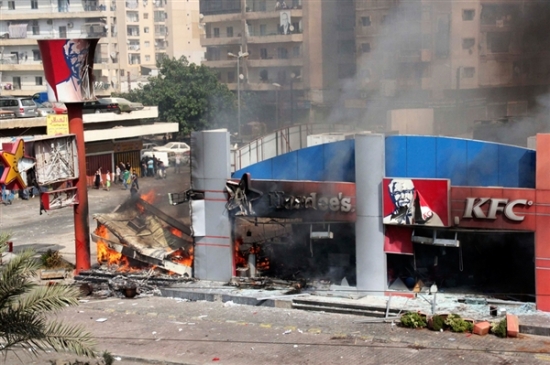 Good thing that this was a day of prayer. Otherwise the violence would have been much worse.

One thing that all Germans have in common is their absolute disgust for all things kleinbürgerlich (petty bourgeois). You know; being small-minded, scrupulously orderly, old fashioned, reactionary, banal, provencial, dilettante and, well, “square?”

Another thing that all Germans have in common is that they are small-minded, scrupulously orderly, old fashioned, reactionary, banal, provencial, dilettante and, well, “square.” You know, kleinbürgerlich?

Take this latest tourist-bashing craze going on by the Enlightened Left in Berlin (the way coolest, least kleinbürglich city in Germany), please:

A gallery in an area known for its trendy bars featured for months a scrawled sign in the window: “Sorry, no entry for hipsters from the U.S.”

Being petty bourgeois here isn’t pretty, folks. It never has been. But it sure is petty. And somebody’s got to do it. I just wish they’re weren’t so many volounteers here all the time.

This is what happens when you fail to deliver (even when nobody ever really knew what you were supposed to deliver in the first place). Hey, what goes around comes around. Or was it what comes around goes away? I, for one, thought they’d never be von gestern (yesterday’s news).

“Since the Pirates have been around, the optical decorum has lapsed, and it’s undignified.”

You’ve heard of the invisible hand being everywhere in the free market system, right? Well if you’re a left-wing terrorist in Germany you can count on having a protective hand taking care of you, too. When it comes to the German justice system, I mean.

Four years for being an accessory to murder? Deduct the trial time, which they already have, and RAF terrorist Verena Becker will be out on the street in no time (the safe German street, now that the RAF isn’t active there anymore).

What can I say? The German judicial system has ein Herz für linke Terroristen (left-wing terrorists). They are the ones who are always the Opfer (the victims). The system made them that way or something. That’s why this article confirms “that the sentence was relatively light, but that’s a good thing.” Why that’s a good thing is still not clear to me. But I’m not German.

Germany’s Federal Interior Ministry insists that portions of the BfV files on Becker will remain confidential, as will passages in the documents related to when she was pardoned in 1989 by then German President Richard von Weizsäcker. All of this incomprehensible secretiveness has only contributed to fostering more speculation.

Michael Buback, the son of the murdered prosecutor, added some emotional moments to the trial. In a statement before the court, the chemistry professor from Göttingen admitted to feeling “attacked, insulted and disparaged” by federal prosecutors. What’s more, he accused investigators of having held a “protective hand” over Becker.

But tradition is tradition. So please remember, all you hotheads out there (despite all the commercialization), just what this day really means, what it’s all about: Violence for violence sake.

YOU are here for a reason, people. So get out there and make me proud.

Terrorism has become the systematic weapon of a war that knows no borders or seldom has a face.